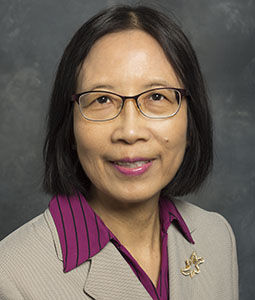 Professor Rita J. Chou joined the faculty of the College of Social Work in 2006, where she also is the director of the South Carolina Center for Gerontology. Previously, Chou received her MSSW in social work and her Ph.D. in social welfare from the School of Social Work at the University of Wisconsin-Madison. She was awarded a Hartford Geriatric Social Work Doctoral Fellowship for her dissertation on job satisfaction among direct care workers in assisted living facilities for older adults. Prior to her studies and career in social work (social welfare), Chou received a Ph.D. in anthropology from the State University of New York-Stony Brook and was a faculty member of the Department of Anthropology at the National Taiwan University.

Chou’s work has appeared in national and international scholarly journals, such as The Gerontologist, The Journal of Health and Social Behavior, Ageing and Society, Research on Aging and the China Journal of Social Work. Her topics have included, filial piety, family support agreements in China, job satisfaction and turnover of direct care workers in assisted living facilities in the United States, and workforce participation and discrimination of older adults in the workplace.

Chou also directs the South Carolina Center for Gerontology, a consortium of faculties and researchers in academic institutions, policy-makers, practitioners, service providers and other professionals in the field of gerontology and geriatrics throughout the state. Chou strives to fulfill the center’s main purpose: to facilitate dissemination of new information and knowledge in aging to help enhance the quality of life for older adults, especially older South Carolinians.