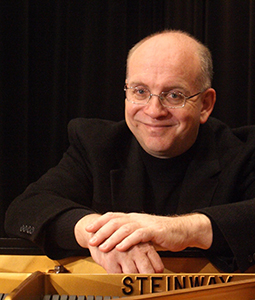 Originally from El Paso, Texas, pianist Matthew Manwarren has established a notable career as performer and artist teacher over years. In 2018, he was appointed Visiting Artist Professor of Piano at the University of South Carolina.  Since 2006, he has served as Professor of Piano at Winthrop University in Rock Hill, SC. He has also served on the piano faculty at Belmont University in Nashville, TN, and at Erskine College, where he held the Harriet Pressly Smith Caldwell Professorship in Music. Since 1998, Manwarren has served on the faculty at the Adamant Music School during the summers, a prestigious program for advanced-level pianists from all over the world.

In 2006, Matthew Manwarren was awarded a Fulbright Teaching Grant through the Council for the International Exchange of Scholars, where he had the opportunity of serving as Fulbright Artist-in-Residence at the University of Cape Town, South Africa. He frequently serves as adjudicator at local, state, and national competitions, including the Josef Hofmann Piano Competition, the Daniel Piano Competition, and the Clavierfest Competition. Most recently, he served as an adjudicator at the Sixth Performer's Festival and Chamber Music Competition sponsored by the Singapore Music Teachers’ Association held at the Yong Siew Toh Conservatory of Music.

Manwarren began his piano studies in El Paso with Mary Lou Hindman Wade and later continued his study with Claude Herdon (a pupil of Tobias Matthay). He earned his undergraduate degree (summa cum laude) from Texas Tech University as a student of William Westney. While there he received the prestigious Eva Browning Piano Scholarship and was winner of the university concerto competition, performing Chopin’s Concerto in E Minor with the Texas Tech University Symphony. He earned his master’s and doctoral degrees from the University of Cincinnati College-Conservatory of Music, studying piano with Frank Weinstock and Elisabeth Pridonoff and organ with David Mulbury. In 1996, Dr. Manwarren was awarded a Teacher Enrichment Grant from the Music Teachers National Association for the purpose of studying at the French Piano Institute in Paris, where he had the opportunity to coach with Dominique Merlet, Pascal Devoyon, and Noel Lee. Dr. Manwarren has also coached with Virginia Hutchings of Atlanta, Walter Hautzig of New York City, and John O’Conor of the Royal Irish Academy of Music. He has also worked with Sheila Paige, coordinator of the Piano Wellness Seminar, where he has had the opportunity to study pianistic technique, ease, and movement at the piano that prevents injury for the pianist. He has coached art song and collaborative performance with vocal coach and pianist Arlene Shrut.