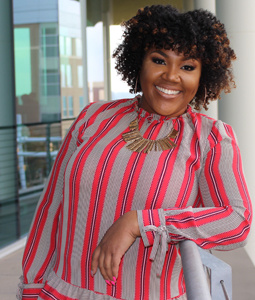 Maranda Williams joined the Moore School in April 2019 as the marketing and communications manager for social media, alumni engagement and development. She is a graduate of the University of South Carolina’s journalism school, where she received a bachelor's degree in public relations. She later earned an MBA from the University of Phoenix in Columbia.

Williams brings with her more than 14 years of experience in sales, marketing and social media. She began her career in marketing and advertising with The State newspaper and was then promoted to help develop a strategic marketing plan for the niche publication, Jolie magazine. She later became the marketing coordinator for Kenneth Shuler Schools, where she led the social media strategy for the school, helping to break records in enrollment numbers and community engagement. She also led several philanthropic initiatives, including a Breast Cancer Makeover project that later became statewide. Before returning to her alma mater, she also managed social media for Virginia College at Columbia, and worked as the director of sales and marketing with Capital Senior Living based out of Dallas, TX.

Williams is a member of Alpha Kappa Alpha Sorority Inc., and she previously served as the president of the Scholastic Press Association for Newspaper Journalism and recording secretary for the National Association of Black Journalists. Her favorite role to date, however, is being a football mom to Elijah.