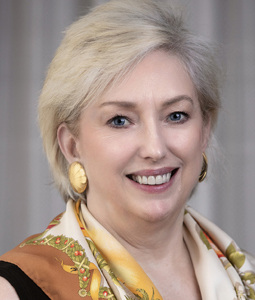 Karen has had a distinguished career in numerous facets of corporate management and nonprofit leadership. Through her work in the U.S. and abroad, she collaborated extensively with corporate, government, nonprofit, education, and civic leaders to create partnerships across a wide variety of industry sectors, connect and promote the various community interests, and engage the public in this work.

In February 2017, she was appointed President of Careers through Culinary Arts Program in New York, a national nonprofit that empowers underserved youth through the culinary arts. Prior to C-CAP, she led the Columbia Museum of Art in Columbia, South Carolina, where she served as Executive Director from 2004-2017. Prior to the museum, she worked for Altria Group in New York for 21 years, where she served as a senior philanthropy, corporate affairs, and communications executive at the company.

Her awards in South Carolina include receiving the “Key to the City” from Columbia Mayor Steve Benjamin; the Greater Columbia Chamber of Commerce Recognition of Excellence in Community Leadership; the City Center Partnership Chairman’s Award from the Columbia business community; the Woman of Distinction Award from the Girl Scouts; the TWIN (Top Woman in Industry) Award from the Palmetto Center for Women for outstanding achievements as a leader and role model; appointments as a Leo Twiggs Scholar by the South Carolina Arts Commission and a Riley Institute Diversity Fellow, named for former U.S. Secretary of Education, Richard W. Riley.

Ms. Brosius has pursued executive education and received a Certificate in Performance Measurement for the Effective Management of Nonprofits from Harvard Business School and was one of 40 participants selected nationwide for a Yale University School of Management leadership program for museum directors. She has received her bachelor’s degree in music from Butler University in Indianapolis and her master’s degree in music history from Hunter College, City University of New York. She was the music assistant to Nadia Boulanger, the noted French conductor and teacher in Paris and at the Ecoles d'arts américaines in Fontainebleau, France. She also undertook studies in Avignon, France as part of Bryn Mawr College’s Foreign Study Program. She was selected as one of 20 to participate in an International Young Leaders conference in Milan on Innovation in Business, organized by the Council for the United States and Italy.

Ms. Brosius has served as an active board member for a wide variety of national civic, cultural, and human service organizations.