The Visiting Scholar Program is co-sponsored by the Dean of the College of Education, the Office of Diversity, Equity, and Inclusion in the College of Education, the South Carolina Honors College, the Office of Multicultural Affairs, the Carolina International House at Maxcy College, the African and African American Studies Program, the Department of English, and the Center for the Education and Equity of African American Students.

Award winning author, Jason Reynolds will serve as the Museum of Education’s National Visiting Scholar in February 2020. Reynolds short campus residency will coincide with the spring exhibition focused on violence in education.  As an internationally acclaimed author, Reynolds has been invited to campus to promote discussions and research inquiry on youth and society, centering his discussions on the themes and topics of several of his books including “Long Way Down,” “All American Boys,” and “The Boy in the Black Suit.”  He will participate in a variety of intellectual activities and interact with several audiences including local youth, UofSC students (undergraduate and graduate), faculty and staff; and local professional educators. Reynolds’ residency will include:

Reynolds will give a major lecture on the University of South Carolina Columbia campus for students, faculty and staff. This event will also be open to local school districts.  The lecture will focus on Reynold’s highly acclaimed book, Long Way Down. Long Way Down is a novel written in free verse that tells the story of an African American teen boy at a crossroads. Determined to avenge his 19-year-old brother's death, Will, age 15, takes his brother's gun out of their shared bedroom to kill the person he's certain is the murderer, but it's a long way down in the elevator. The novel takes place in the span of the 60-second ride from the seventh floor to the lobby, as Will's past and "The Rules" he's learned about being tough flash before him, aided by conversations with the ghosts of friends and relatives who were victims of gun violence. This book bravely and unapologetically presents the life realities with which many youth grapple-- death, grief, violence, social codes, and emotional health are all central to this story.  The book will be a common read among small cohorts at UofSC and at local public schools.

Reynolds will co-lead a one-day creative writing retreat open to students and faculty. Anthony Keith, poet and spoken word artist, will co-lead the retreat with Reynolds. The retreat’s purpose is to help groom future fiction and/or creative writers (poets, etc.) by cultivating their skills, developing an intellectual peer community of writers, and helping future writers to better understanding the craft as a profession. The retreat is co-sponsored by the Department of English and the African and African American Studies Program. 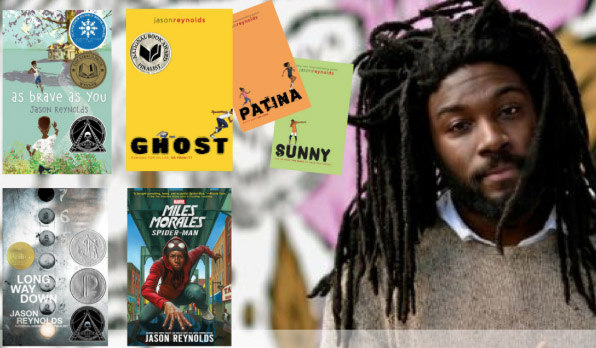 The American Booksellers Association’s 2017 spokesperson for Indies First, his many books include When I Was the Greatest, Boy in the Black Suit, All American Boys (cowritten with Brendan Kiely), As Brave as You, For Every One, the Track Series (Ghost, Patina, Sunny, and Lu), and Long Way Down, which received both a Newbery Honor and a Printz Honor. A theatrical interpretation of his book, Long Way Down was recently debuted at the Kennedy Center of the Arts in Washington DC. Long Way Down has also been optioned as a movie by Universal Pictures and will be produced by John Legend and Michael De Luca.  In May 2018, Reynolds was awarded an honorary doctorate by Lesley University.