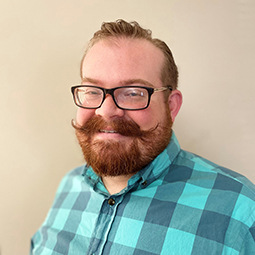 Bio: I am a second-year graduate student, studying the American Civil War and Reconstruction. My primary research interests consist of combing the senses, emotion, and memory into contextualizing the study of the Civil War and Reconstruction. I am currently working on my MA thesis, in which I use the Brooklyn-based Sumter Club, formed right before war's end, to showcase how the club's use of the sense of sight humanizes how Civil War memory was made. By doing so, I seek to go beyond the intellectual- and culture-centric analyses of the troubled paths of how the Civil War was and is remembered. I endeavor to link how people sensed the war with the creation of the monuments, images, reenactments, and interpretations of the war.

I have interned at Brandywine Battlefield Park in Pennsylvania. I was both a historic site interpreter for pubic tour groups and educational programs and a genealogist for those seeking more information about their Revolutionary War ancestors. I also interned in the Public History realm as a researcher/writer/editor for the Marshall University-created History App, "The Clio." I created and edited posts on a variety of buildings, battlefields, and other sites covering a wide array of American History to allow people on their mobile devices to see the history around whatever town or city they were visiting. I also was chosen to be an archivist for a surgeon-philanthropist in West Virginia for his medical museum to better document and preserve his life's work. I have presented at conferences in Ohio, Tennessee, and New Mexico. The topics of my professional papers include an analysis of the Port Royal Experiment as recorded by a US Special Treasury Agent assigned to the South Carolina Sea Islands during the Civil War and an analysis of Lincoln's Reconstruction ideals portrayed by Hollywood.