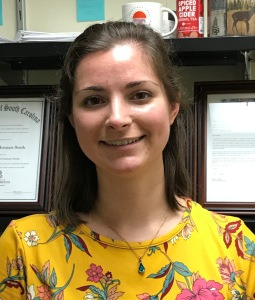 Heather Roman-Stork is a PhD student in Marine Science in the Satellite Oceanography Laboratory at UofSC working with Prof. Subrahmanyam Bulusu. She is originally from Simsbury, CT and studied Environmental Geoscience at Boston College, where she earned her BS and did her undergraduate research in tropical paleoclimate. After experiencing the record cold and snowfall in Boston, Heather decided to escape both and to follow her interest in tropical dynamics and warmer climates. She moved to Florida State University in 2016 where she earned an MS in Meteorology in 2018 while working with Prof. Mark Bourassa at the Center for Ocean Atmosphere Prediction Studies (COAPS). After dealing with several hurricanes in Tallahassee, Heather moved to UofSC in August 2018, where she has been studying ocean-atmosphere interactions in the Indian Ocean with Prof. Bulusu, also previously of FSU and COAPS. Heather’s research has focused on the use of satellite observations of the ocean and atmosphere to study intraseasonal processes associated with the monsoon system in the Indian Ocean.

While at UofSC, Heather has published 11 peer-reviewed journal articles, 5 of which are first author publications, and she has 3 more in prep or in review. She has presented her work nationally and internationally at AGU, EGU, Ocean Sciences, ONR PI Meetings, NASA Science Team Meetings, NOAA Seminars, and at a NASA/JPL Seminar. She was awarded a NASA/South Carolina Space Grant Graduate Fellowship in 2019 ($12,000) for her work using satellite observations and model simulations to study salinity’s role on monsoon onset in the southeastern Arabian Sea. Heather was named one of the 2020 Breakthrough Graduate Scholars by the Office of the Vice-President of Research, was selected as a recipient of the 2020 National Association of Geoscience Teachers Outstanding TA Award, and received the 2020 Marine Science Publication Award. Recently, she was also awarded a prestigious 2020 NRC Research Associateship Award (declined).