An undergraduate major or minor in German will give you a head start on the future. In the twenty-first century, unified Germany has become the economic and political leader of the European Union. It is also one of the main partners of the United States in an increasingly internationalized world. Right here in South Carolina, there are over 120 German companies. Aside from preparing you for a career as teacher, translator, or college professor, a BA in German can help prepare you for careers in international business, international law, the Foreign Service, and hospitality and tourism.

Submit a sample essay in German that you wrote for a German course at the University of South Carolina. (Submissions will generally be solicited at the start of Spring semester.)

Students who receive the stipends must apply the funds to expenses associated with studying German language and literature at UofSC during the academic year.

Our program is home to the Sigma Chapter of the National German Honor Society, Delta Phi Alpha.

To become a member you must have:

If you have any questions about Delta Phi Alpha, please contact the faculty adviser, Dr. Kristina Stefanic-Brown at stefani2@mailbox.sc.edu.

Looking for more specific information, like what classes you'll need to take to graduate, learning outcomes, and which classes we offer? The academic bulletin is the university's official document of record concerning undergraduate-level academic programs and regulations. 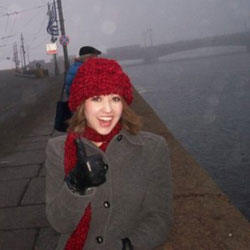 Stephanie Clough studied German along with Russian and French at USC. Today, she's glad she did. That decision brought her back to USC as the program officer for the Critical Language Scholarship Program.

Apply for the MAT

Did you know we offer a MAT program in French, German, and Spanish? Learn about the program.