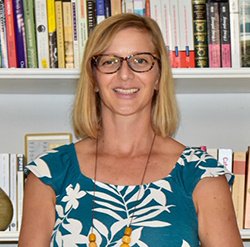 Kristina Štefanić Brown is originally from Zagreb, Croatia, where she earned a degree in German and Italian languages and literatures (2001) from the Faculty of Humanities and Social Sciences. She received her M.A. in German Studies (2006) and her Ph.D. in Comparative Literature (2010) from the University of South Carolina, Columbia. Her research interests include contemporary German and Italian literatures and cinemas, German-Jewish authors, and Holocaust and trauma literature. She is also intrigued by intersections between genre and the formation of national identity. She has taught a wide array of language courses in both German and Italian. In addition to language and literature courses, she developed and taught a course on contemporary German cinema that explores and analyzes how Germans portray themselves cinematically, and how minorities shape cinematic discourse on German identity.