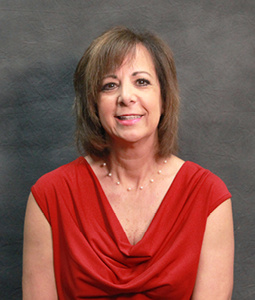 Julie McCoy, a native of Sumter, graduated from Salem Academy in 1977. She then attended Sumter Area Technical College where she graduated early receiving a Certificate in Data Entry in 1978. She has since attended Central Carolina Technical College, USC Sumter and the University of Kentucky (CBMI).

Julie has been employed at USC Sumter as a staff member since March 2002 where she was a full time temporary in the bookstore as Fiscal Technician I/Assistant Manager. In October 2002 she became a full time permanent employee in this position.

Julie was promoted on April 27, 2009 to Bookstore Manager. She manages and oversees the daily operations of the bookstore. Julie requisitions, orders and handles buybacks of the textbooks for the store and assists in ordering the stores merchandise. She assists students and oversees the daily performance and operation of the computer system for both stores and operates the bookstore website. Julie processes the accounts payable for the bookstore, cafe' and the campus.

Julie and her husband Van live in Sumter along with their daughter Heather.