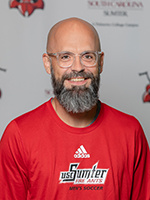 Prior to USC Sumter, Coach Gould was the Director of Coaching for the Northern Chautauqua Soccer Association/Concord FC in Western New York. Most recently he was also the Head Coach for the 19U Girls and Co-Head Coach of the 14U Boys of Concord FC. Gould helped coach different teams to tournament championships in five consecutive seasons (2015-2019), as well as a BWNYJSL League Championship (2018) for his 19U Girls, with an undefeated record in league play. He also served as the NYS West Youth Soccer Association Southern Tier District Academy Director in 2018.

He was also the Head Coach for the Fredonia High School Girls Varsity Soccer Program (2016-2019). He helped lead the FHS program to the NYSPHSAA Section 6, Class B2 semi-finals once and finals twice in four years. They won the 2016 title and earned a #11 ranking in the New York State Sportswriters Association Polls at seasons end with a 16-3 record. Gould helped develop 22 CCAA West League All Stars in 4 seasons, including a student-athlete who earned ALL WNY player honors twice and league offensive player of the year honors once. He also served as one of the Chautauqua County Senior All Star game committee selection members, and one of the coaches for the match the past 4 seasons. Coach Gould’s teams also earned both individual or team sportsmanship awards during this time.

Student-athletes coached by Gould have also had tremendous success in the classroom. In his 2019 campaign at FHS, all seven of his then juniors were inducted into the National Honor Society. As a club soccer coach his favorite memory was one of his teams raising over $4,000 to cover the cost of providing clean drinking water to a school in Uganda.

Coach Gould had the opportunity to start his collegiate coaching experience (2008-2009) as a volunteer assistant/goalkeepers' coach under the tutelage of the winningest Men’s Soccer Coach in school history at Fredonia State University of New York, Coach P.J. Gondek. While there Gould’s goalkeepers were twice recognized with ALL-SUNYAC honors. One student-athlete earned 3rd Team ALL SUNYAC honors, and another was named to the ALL-SUNYAC Tournament Team the following season. Gould said “I will be forever grateful for Coach Gondek taking a chance on me, pouring into me, and helping shape my coaching over the years. He is simply one of the best teachers, character developers, and people builders, in the game today.”

Off the pitch, Gould has traveled as a guest preacher, motivational speaker, and consultant to many different types of organizations in business, ministry, not-for-profit, and K-12 educational settings in the areas of critical-thinking, problem-solving and decision-making as it relates to creating cultures that build healthy relationships and create teams of influence.

When asked about his role as the next Head Men’s Soccer Coach at USC Sumter Coach Gould responded “I would like to thank Dean Sonntag, Athletics Director Coach Cataldo, and the search committee for the opportunity to join the USC Sumter family. I would also like to thank my wife, Cara, and our children. It’s their love and support that allow me to be who I am and do what I do. I am excited to be part of the next chapter of Men’s Soccer at USC Sumter.

Coach Gould and his wife, Cara, have three children, Ella, Oscar, and Sawyer.