Dr. Sandra J. Jordan became the fourth Chancellor of the University of South Carolina Aiken on July 1, 2012 and, as Chancellor, serves as the chief executive officer and principal spokesperson for the University. Prior to becoming Chancellor, Dr. Jordan served as Georgia College & State University's Provost and Vice President for Academic Affairs. In that leadership position she served as a senior member of the president's cabinet and as chief academic officer for the University.

Among other positions during a thirty year career in higher education, Dr. Jordan served as Provost and Vice President of Academic Affairs at Mississippi University for Women in Columbus. Prior to that position as Associate Provost and Dean of the College of Humanities and Fine Arts at Murray State University (Kentucky).

Through her career she has worked extensively to expand international educational partnerships by negotiating agreements and building alliances with universities in Malaysia, Indonesia, Japan, China, Thailand, Bahrain, Jordan, Korea, Taiwan, Great Britain, the Caribbean, and India.

Dr. Jordan received her Doctorate (Ph.D.) and Master of Arts degree in the History of Art from the University of Georgia, and a Bachelor of Arts degree in art (with teaching certification) from the University of Alabama. Her teaching and scholarly interests include 17th and 18th iconography, and intellectual and art history from the Renaissance until the advent of Modernism. She is an award winning teacher and an active scholar and grant recipient, frequently writing and presenting on art historical and higher education topics.

Dr. Jordan attended the Management Development Program at Harvard University's Institute for Higher Education; the 21st Century Leadership Institute sponsored by ALIA and AASCU, and was a summer fellow at Vanderbilt University's Institute for Higher Education Management. A student of leadership, she is often asked to mentor new leaders at the state and national level. While in Georgia, she was appointed by Georgia Gov. Nathan Deal to a task force to redesign the model for funding higher education in the state of Georgia. Dr. Jordan was awarded a letter of commendation for her volunteer work on behalf of the arts by Kentucky's Governor Patton, who also awarded her the designation of Kentucky Colonel. Dr. Jordan is an active member of the community, serving on numerous boards and civic clubs and is committed to providing opportunities for USC Aiken to expand civic engagement. Additionally, she serves on the Southern Association of Colleges and Universities Commission on Colleges board of directors; the Savannah River Site Community Reuse Organization (SRSCRO) board; the Nuclear Workforce Initiative (NWI) Task Force; the Citizens for Nuclear Technology Awareness (CNTA) and the Peach Belt Conference Board of Directors. Dr. Jordan is also a member of the Rotary Club of Aiken, the Aiken Chamber of Commerce and serves on the Board of Directors for the North Augusta Chamber of Commerce and the Board of Directors for United Way of Aiken County.

Dr. Jordan is married to Mr. Michael Jordan, an architect and graduate of Clemson University. Additionally, Mr. Jordan is on Aiken's Habitat for Humanity Board and serves as USC Aiken's "First Gent." They have a son, Matthew, who is a doctoral student in electrical engineering at Georgia Tech. Dr. Jordan and Mr. Jordan reside in Aiken. 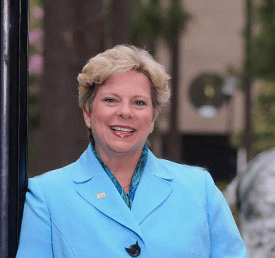