I come to you as a pilgrim this morning, as someone who remains confused and broken hearted. Last Thursday morning Patricia and I got up asking ourselves the same thing many of you did … we asked why?

But I have now stopped asking “Why?” I know that with my small and incomplete mind, I would be asking that question with my dying breath. To keep asking why, is futile. So let us stop asking Why … and start asking “How?”

Let’s show the world, but more importantly, let’s show ourselves … our fellow South Carolinians, of all skin color, that we have used love as a powerful force to unify us in a way that we so badly need at this moment.

How can we come together as a society, and as a State where love prevails over evil … where justice defeats injustice, and where reconciliation and compromise rule over the thirst to win at any cost.

It is a time to ask ourselves if there is not some other place for the Confederate flag … is there not a place that would unify our people rather than divide us … that would facilitate the respect for the ancient soldiers who died defending their homeland, rather than clouding that respect with so many other feelings engendered by its prominent location.

Of course, there is such a place. And I ask our state leaders, who have the authority to address that question, to find that place and to move the flag from its current location in front of our seat of government, where laws are made … and leadership dwells, to that better place. We know they can do it, motivated by this great tragedy and the need for all of us to heal.

Let’s show the world, but more importantly, let’s show ourselves … our fellow South Carolinians, of all skin color, that we have used love as a powerful force to unify us in a way that we so badly need at this moment.

I will pledge the University’s engagement in conversations, if it could be helpful. I am certain that our students, faculty, staff and alumni will engage if desired. We would come empowered by only one thing … a document … the Carolinian Creed … our code of conduct at USC.

It says “I will respect the dignity of all persons” and goes on to say that “I will demonstrate concern for others, their feelings, and their need for conditions which support their work and development.”

In a Resolution adopted on December 13, 1999 the Board of Trustees addressed the effect of the flag, then on the Capitol Dome, on the University … on our reputation and on our business. The message was clear then and remains the same today … yet our reputation and our business are not the most significant reasons for asking, respectfully, our elected government leaders for change. It is because it is the right thing to do.

Ours is a state that can handle the hard stuff; as South Carolinians we extend a healing hand, a hand of friendship, a hand of hope, better than most. And now we have learned from the victims’ families, including the families of the three who proudly held USC degrees, Reverend and Senator Clementa Pinckney, Cynthia Graham Hurd, Rev. Daniel Lee Simmons, and Mrs. Jennifer Pinckney, as well.

We have learned much from them, and we should keep that lesson of reconciliation strong.

Jackie Robinson said: “A life is not important except in the impact it has on other lives.”

The lives of our nine slain brothers and sisters were so very, very important. Let’s seize this moment to positively impact the lives of all South Carolinians. I ask, now that we stand, before our closing, for a moment of silence … for nine moments of silence as we keep their memories strong and as we pay tribute to their impact on all of us. 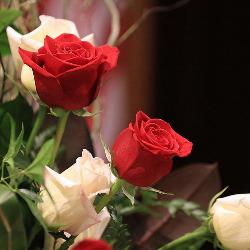 The Carolina Family joined together for reflection and remembrance at a memorial held for the victims of the Charleston tragedy.