University 101’s small class size and discussion-based format create the perfect environment for students to learn from one another. Students often share information with their classmates about campus resources, approaches to studying, opportunities for involvement, and personal experiences relevant to course topics. Some students are even able to influence the entire classroom environment. These students lead their classmates by example – in demeanor, attitude, participation, and overall regard for others. Gabby Brewer and Mac Meyer were two such students, both in Cynthia Newman’s fall 2017 section of University 101.

Cynthia recognized early on the difference Gabby and Mac were making in her classroom. Gabby and Mac’s contributions were confirmed when Cynthia opted to let her class decide which two students she would nominate for the University 101 Scholarship, an annual award recognizing students who make significant contributions to the learning environment and community within the University 101 classroom. The class overwhelmingly nominated Gabby and Mac. Both applied for the scholarship and each were selected as recipients for the 2018-2019 academic year.

[Gabby] inspired her peers to increase their classroom attendance, participate more actively in group discussions, and put more effort into assignments – simply because she had such a positive presence in the room.

Cynthia watched Gabby grow over the course of the fall 2017 semester and recognized that other students looked to Gabby for advice on everything from their social life to their personal and academic goals. “Gabby consistently gave sound answers where charm and wit were equally balanced with wisdom and insight…she inspired her peers to increase their classroom attendance, participate more actively in group discussions, and put more effort into assignments – simply because she had such a positive presence in the room.”

Cynthia also observed that everyone would watch Gabby to see how she would approach or react to things, even requesting that she do her presentations first so they would know how to do theirs. Cynthia shared that the students in the class looked to Gabby for leadership but that Gabby would sometimes hold back and allow others to contribute before she did. “She didn’t just take the reins and run with being a leader. She would wait to see if someone would step in first and then take the reins once others had a chance to speak.”

Mac also distinguished himself amongst his peers. Like Gabby, his fellow students looked to him for guidance. “Mac let other people take the lead [in class], but people would quietly look to him for the final word. He is super easy to relate to and is funny. He got excited about each individual person. He has the biggest heart [and] is always smiling and happy. He has special insights about what makes people tick.”

Mac let other people take the lead [in class], but people would quietly look to him for the final word. He is super easy to relate to…he got excited about each individual person.

Mac’s involvement on campus contributed to the difference he was making in his classroom community. “Mac opened himself up to new experiences and committed wholeheartedly to those activities he chose.” Cynthia said Mac also ended up becoming an under-the-radar role model for his fellow male classmates, making connections with them over things like learning how to tie a bow tie. “It is not just that Mac embodies the spirit of this course; it is that Mac embraces the idea of what Carolina means to those of us who cherish it.”

Neither Gabby nor Mac knew the difference they were making in their classroom environment at the time, though they each recognized the impact of the other. “Gabby stood out because she always came to class with a smile on her face,” said Mac. “And her enthusiasm was contagious.” Gabby shared that she nominated Mac for the award because she recognized his unique contributions in class. “He made such a great effort.”

For more information about the University 101 Scholarship, visit our Awards & Scholarships page. 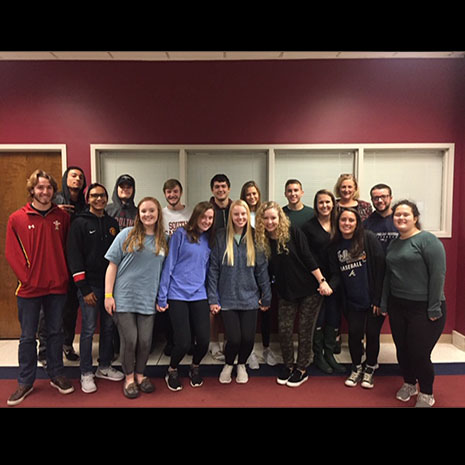