When Issy Rushton arrived at the University of South Carolina from Queensland, Australia she was alone and terrified about what the next four years would hold.  “I came to UofSC and I was so excited to be at the University. I had all these hopes and dreams,” she says. “But I was nervous I wouldn't be able to achieve them. I didn’t know anybody, and I didn’t know what I wanted to get involved in.”

Four years later, Issy has maximized her time at UofSC. She is now Student Body President, a University Ambassador, and a Presidential Ambassador. She credits University 101 as the first step on her path to success at Carolina. “It really set me on a trajectory to get involved on campus, to meet friends, and to find out what I was passionate about.”

“University 101 helped me to feel a lot more at home, because I knew I had a group of students with me and a professor and peer leader who genuinely cared."

Issy recalls that in those first months at Carolina, her U101 class provided her with a much-needed sense of community.

“University 101 helped me to feel a lot more at home, because I knew I had a group of students with me and a professor and peer leader who genuinely cared. And they allowed me to ask questions that maybe I didn't feel comfortable asking other people.”

The relationships that Issy formed in University 101 continue to this day. She remains in touch with her instructor, Scott Kaplan, who she asked to write her letter of recommendation for law school. She selected Scott for this honor because, “he was not only my instructor, but he has been a mentor to me over the years. If I ever have a question or a problem, he is one of the first people that I contact. He’s stayed in strong communication with me, and for that I’ll be forever grateful.”

Issy also credits her University 101 class with giving her the push she needed to go outside of her comfort zone. “I ran for Executive Council in my sorority, and I really do attribute that to my instructor, peer leader, and peers in U101 for believing in me and helping me to find a passion for leadership.” The connections Issy developed in her sorority led her to get involved in Student Government and to eventually be Student Body President.

“One of the most important pieces of University 101 was the presentations from other offices on campus, because they allowed me to take full advantage of all the resources that UofSC has to offer"

In addition to Student Government and her sorority, Issy is also deeply involved with USC Dance Marathon, The Big Event, and Carolina Outreach, organizations she learned about in University 101. Issy also learned about resources like the Student Success Center and Student Health Services through Campus Partner Presentations.

“I think one of the most important pieces of University 101 was the presentations from other offices on campus, because they allowed me to take full advantage of all the resources that UofSC has to offer. I’ve used them over the past four years, and I don’t think that I would have known about them without those presentations.”

Last year, Issy was invited to Scott Kaplan’s University 101 class to speak about leadership and involvement. “This journey didn't end after University 101, it really has continued over the years. Instead of being the student in University 101 who doesn't know anything, now I can help mentor other students who are going through the same thing I went through,” she says. “I look back on my time in University 101 very fondly. If I hadn’t taken the course, I don’t know where I would be today.” 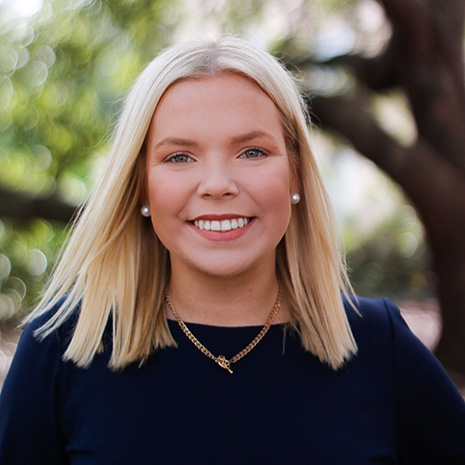 Issy Rushton is the Student Body President at the University of South Carolina. Issy is a double major in Psychology and Criminal Justice in the College of Arts and Sciences.