A social psychologist at Stanford University, Jennifer Eberhardt conducts research on race and inequality. Through interdisciplinary collaborations and a wide-ranging array of methods—from laboratory studies to novel field experiments—Eberhardt has revealed the startling, and often dispiriting, extent to which racial imagery and judgments shape actions and outcomes in our criminal justice system and in our neighborhoods, schools, and workplaces. She not only highlights the negative impact that racial bias can have on us in these settings—she provides direction on what we can do about it. After receiving her Ph.D. from Harvard University, Eberhardt joined the faculty at Yale University in Psychology and African & African American Studies. She joined the Stanford faculty in 1998, where she is currently a Professor of Psychology, the Morris M. Doyle Centennial Professor of Public Policy, and a Faculty Director of Stanford SPARQ (a university initiative to use social psychological research to address pressing social problems). In 2014, Eberhardt was named a John D. and Catherine T. MacArthur Fellow and one of Foreign Policy’s 100 Leading Global Thinkers. In 2016, she was elected to the American Academy of Arts and Sciences as well as the National Academy of Sciences. Eberhardt is deeply committed to public service and over the years has been invited to speak about her work at the White House, the U.S. Department of Justice, the State of California Department of Justice, the Supreme Court of California, and the California State Capitol, among other places. In 2019, she published Biased: Uncovering the Hidden Prejudice that Shapes What We, See, Think, Do, which has received book awards from the American Psychological Association, the Association for Psychological Science, and was runner-up for a non-fiction Literary Peace Prize. In 2021, she became the first African American president of the Association for Psychological Science. Amid unprecedented inequality and growing polarization around the world, she is enlisting science in the fight for equal justice. 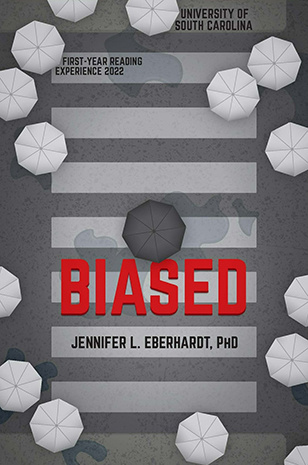