UofSC Professors Thaddeus Davis and Tanya Wideman-Davis have been collaborating on Migratuse Ataraxia, an interdisciplinary project featuring movement, live art, sound and gastronomy, since 2016. The title of the work comes from the definition of the words, migratuse which means migrated, departed, to have gone away, having been changed, and the habitual patterns of moving from one place to another. Ataraxia is defined as calmness or a peace of mind, emotional tranquility.

We are taking film and art installation and trying to mobilize historic images and lean back on history, so we can project into the future what could quite possibly exist.

The project, which was awarded a 2017 Office of the Provost grant for Creative and Performing Arts in 2017, is a collaboration that also includes visual, performance artist Michaela Pilar Brown; scholar, performance theorist, curator Myron M Beasley, Ph.D.; and dramaturg Gina Kohler. The project seeks to answer questions about black space, black performativity, and the history of Africans existence as slaves here in antebellum life.

The Office of the Provost is now accepting applications for the 2018-19 Internal Grant programs from faculty at the USC Columbia campus and the Regional Palmetto College campuses. Competitive grants are available for Creative and Performing Arts, Humanities, Social Sciences, Pedagogy, and Visiting Scholar Grants. Since 2010, more than 450 grants have been awarded to support full-time faculty, regardless of rank or track.

Thaddeus Davis explains how two years of research is coming to life. “We are taking film and art installation and trying to mobilize historic images and lean back on history, so we can project into the future what could quite possibly exist.”

“We have developed a lecture that examines antebellum representation in 1841 for a community of free blacks in Louisiana, as depicted in Dance Theatre of Harlem's Creole Giselle. The Creole Gisselle dance rendering of black antebellum life allows us to discuss Migratuse Atarxia as a Transart production that seeks to shed light on the lives of many unknown enslaved Africans. In October we presented four lectures at Loyola Marymount Unversity Los Angelas titled: Methodologies of Translation, Retelling, and Remaking: From Dance Theatre of Harlem to Wideman Davis Dance.

Thaddeus Davis and Tanya Wideman-Davis were also awarded the National Dance Project Grant through the New England Foundation for the Arts (NEFA) to expand their research and production.

The first performance of Migratuse Ataraxia will be in April 2019 at the Hampton-Preston House in Columbia, SC.

The deadline to apply for the grants is Dec. 1 and applications must be submitted through USCeRA. If you have any questions about the grant process, contact Coyet Greene at coyetg@mailbox.sc.edu or 803-777-2808. Winners will be notified by April 1, with funding to be available by July 1. 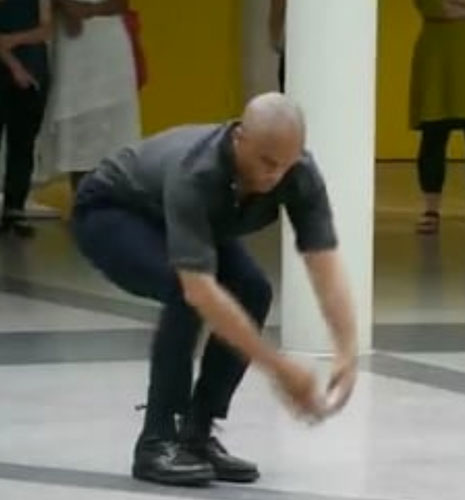 See "Migratuse Ataraxia" in its earliest stages in this video shot at an artists retreat held in Germany in 2016.