Office of Diversity, Equity and Inclusion

The University of South Carolina hosted a series of public events in commemoration of the life and legacy of Martin Luther King Jr. Jan. 18 – 21. The university’s 35th annual celebration of MLK Commemorative Weekend honored the civil rights leader, and the 50th anniversary of King’s assassination.

The annual Martin Luther King Jr. commemorative breakfast was held at 7:30 a.m. Friday, Jan. 19, in “The Zone” at Williams-Brice Stadium. The university presented the annual Social Justice Awards to faculty, staff and students who have worked to promote equality and justice at the university and in the greater community. The winners are: Michele Myers, a clinical associate professor and MAT program coordinator in the College of Education; Ken Campbell, an associate professor in the School of Journalism and Mass Communications; Daizha Green, a senior early childhood education major in the College of Education; and Sarah Keeling, manager of student services in the School of Library and Information Science.

Each year the breakfast draws nearly 500 people from the community and campus. 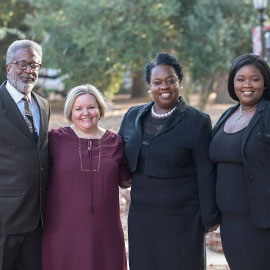